We talk to Luisa Ajo

In January 2020, excited and betting on the growth of the company, we ventured into the opening of a new delegation in Ibiza, only two months later to welcome a global pandemic, a confinement and a lot of uncertainty.

Luisa Ajo tells us how they have lived the start of this delegation that has practically not known other times than those of covid19.

To begin with, Luisa briefly tells us how the day-to-day activity changed with the arrival of the pandemic and how they quickly adapted to the health measures.

The Ibiza delegation opened in January 2020, during the months of January and February we started to move and in March the virus arrived. So we had to live with the pandemic almost from the very first moment.

We quickly had to adapt to wearing masks and gloves all day long and keeping a safe distance. In addition, we disinfected the office desks on entering and leaving the office, disinfected the machinery in the warehouse and disinfected each driver's vehicle.
These measures made us feel safer and, to tell the truth, they were the right thing to do because they allowed us to continue coming to work.

I think we all felt fortunate to be able to continue working during the stricter confinement (even if it was a reduced schedule) because it helped us to distract ourselves and not think so much about all the negative news that came to us.

Although at the beginning we were very scared because of the uncertainty, I think that as time went by, we got used to this "style" of life and we ended up getting used to living in this strange situation. 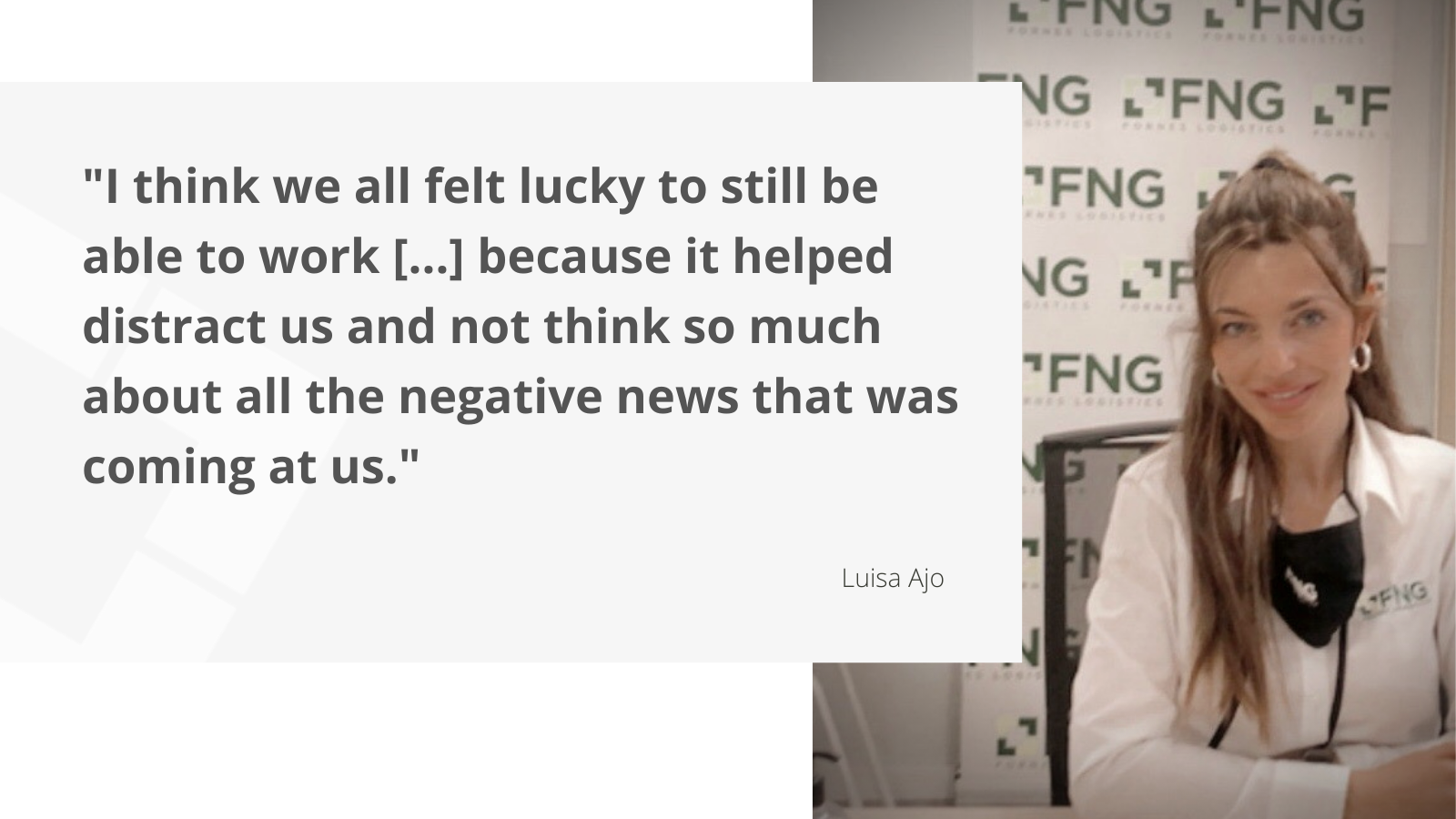 We commented on how the confinement affected the merchandise transported.

When the confinement began, although very little time had passed since the opening of the delegation, the drop in merchandise was very noticeable, since we moved a lot of retail and, when the stores closed, we practically did not receive any of this type of merchandise. The closure of the hospitality industry was also very noticeable in terms of the volume of merchandise we handled.

However, in other sectors, such as construction, where we also move a lot of merchandise, we did not see that it affected as much as in the other sectors.

As for the challenges that the pandemic has brought to the workplace, Luisa tells us.

Personally, one of the challenges I have encountered has been working with masks. Maybe in other jobs it doesn't affect so much, but when you have to be on the phone for a long time, it's quite heavy.

On the other hand, not being able to relate to each other as we would like to, I think it affects everyone emotionally. Also, culturally we are people who tend to get very close and have close contact, and it is difficult to change habits from one day to the next.

We commented on the importance of the sector in times of crisis.

During the pandemic, a lot of visibility was given to the medical sector and the great work done by health workers (totally deserved) but not much importance was given to what we carriers did, who were there for everyone without stopping for a single day. Who brings you the food, the masks, the respirators that save lives...?

Over the last year, we have had the opportunity to move many pallets of masks. In those moments, you see the gravity of the situation. On an island, if you run out of masks, it is very difficult to have more units quickly, and we were part of that "help", so when boxes of medical supplies arrived, they had top priority.