We talk to Marc Pascual

As in offices, health restrictions have also affected the life of warehouses, both internally and in their relationship with the outside world.
Today we find out how the way of working in the warehouse of our Barcelona office has changed from Marc Pascual.

To begin with, we talk about how day-to-day activity in the warehouse has been affected.

The most important change in the warehouse has been the way we deal with our drivers. Some of them come to our facilities every day and, as a result, a bond is created, even a friendship with some of them. However, with the arrival of the restrictions this has been somewhat lost. Not being able to enter the facilities or having to respect the distances has meant that the relationship is not the same.

On the other hand, we have also noticed it among the team itself. We've always been a close-knit group, we've always made jokes and been united, but not being able to get close enough to keep a safe distance has made us cool down a bit. Especially at the beginning, when we didn't know what we were facing and were more afraid, it affected us a lot.

In spite of all this, we were able to continue working without too much trouble. Our work in the warehouse is more individual, everyone has their own function and can do it independently, respecting the distance between colleagues.

As I mentioned, the biggest problem has been at the external level, both the drivers who came from other companies to our facilities and when we went to make the pickups. For security reasons, we could not enter any place and, therefore, they had to load the vehicles without being able to see the merchandise, without knowing exactly how it was or how it was prepared, so you could not decide how to load it in the way you thought was best. This ends up affecting the whole job. 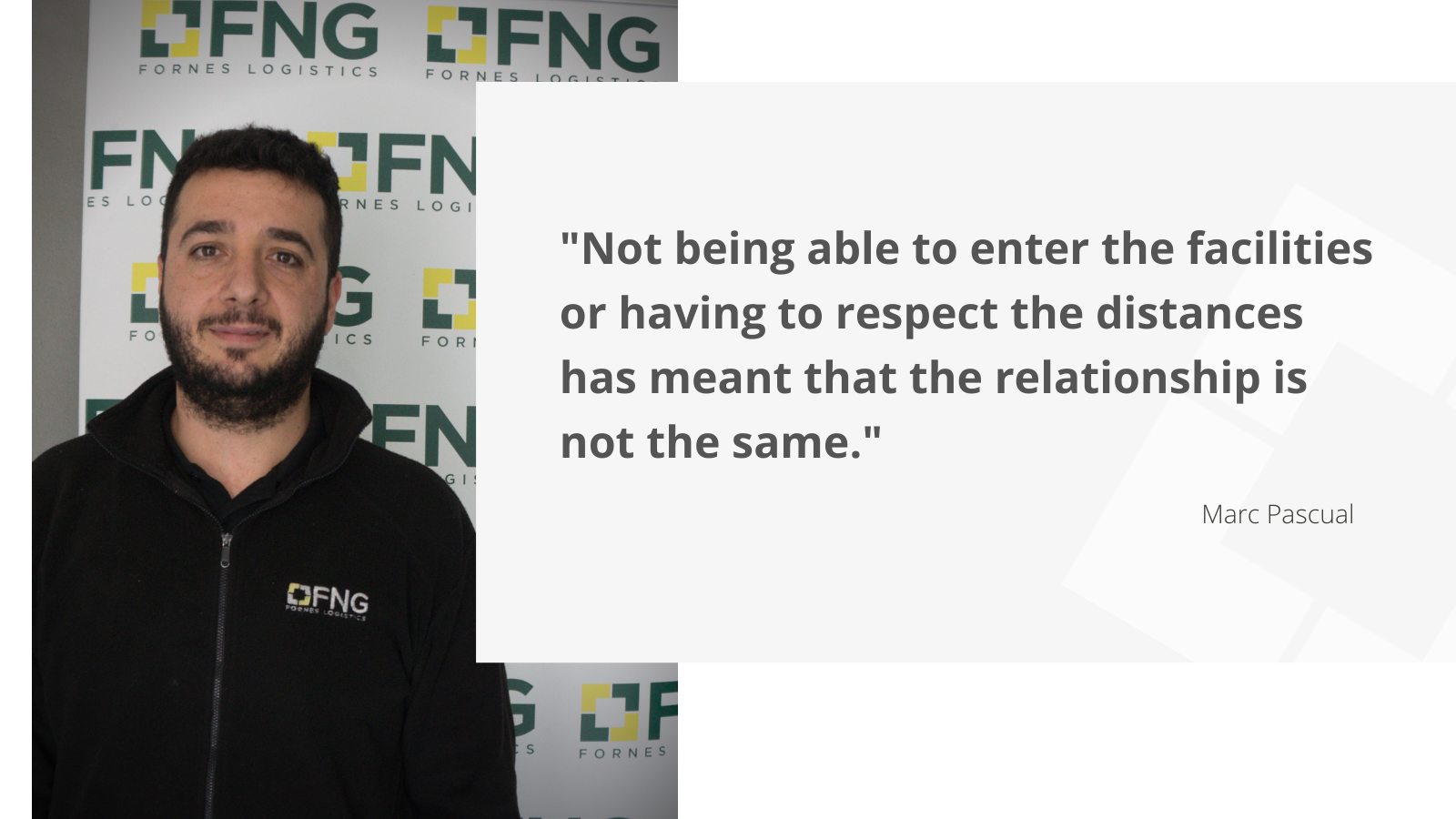 We talked about the sectors that have been most affected by the drop in activity.

A very high percentage of the merchandise moving between Barcelona and the Islands is destined for the hotel and catering sector, so when everything was closed, we experienced a significant drop in volume.

In summer we noticed it a lot. Normally, a lot of drinks (different alcohols, wines, etc.), some food and a large volume of cleaning products for the hotels are transported. When the hotel business is closed, all this merchandise disappears.

Regarding the prevention measures taken, Marc tells us the following.

From the beginning, we quickly adapted to the recommended prevention measures, we used gloves, masks and hydroalcoholic gel. In addition, we set up work shifts to ensure safety distances. This also facilitated disinfection since the same operator used the same machine throughout his shift and, once finished, he disinfected it for the next shift. In addition to the machinery, the changing rooms were also disinfected every noon before the afternoon shift began.

Working in shifts had its drawbacks. Although we left everything ready for the next shift, not being able to communicate easily as we were used to, even if you don't want to, ends up affecting you.
In any case, implementing these measures has helped us to feel secure. Whether we like them more or less, they are measures that have to be maintained and followed to the letter for everyone's safety.

Teleworking, for example, is a measure that I personally have not implemented but I think it is very interesting for office tasks. With some minimum guidelines, I believe that it can be used and that it is a very important measure to take into account for the future.

We reflected on the positive aspects brought about by the pandemic.

From my point of view, transport has been for years a rather underestimated sector and with the pandemic many people have realized its importance, that it is an essential sector in our society. I think that this has been positive in terms of visibility, although there is still a lot of work to be done to position transport where it deserves to be.

Finally, Marc tells us something that has surprised him during the course of the last year.

I was surprised to see how many companies, whose products stopped selling due to the closure of the hotel industry or the slowdown in other sectors, immediately found new ways to produce or distribute other products that were in much greater demand, such as hydroalcoholic gels or face masks. They quickly innovated to survive.